The Slow Food Movement and the Makah Ozette Potato

You are here: Home / The Slow Food Movement and the Makah Ozette Potato

You’ve heard of fast food naturally, but have you heard of Slow Food? Fast food is bad for us, Slow Food is good for us and our environment. Fresh, chemical and pesticide free food that is valuable to us all, from the field to the table.

The Slow Food Movement started as a grass roots campaign for a common good; clean, fair and healthy food free from GMOs. Today they have over 100,000 members in 150 countries. Slow Food USA was founded in 2000 and now has 200 chapters, consisting of 12,000 members across the Nation, inspiring communities to transform the way we produce and consume food, promote sustainable agriculture, and preserve traditional foods and knowledge.

Promoting education is a crucial part of the Slow Food movement. From school gardens to local, national and international events they inspire people to take an interest in their food and where it comes from, to rediscover traditional regional cooking, to develop a taste for good, clean food and to support sustainable agriculture and small-scale farmers and producers.

Irish Eyes is partnering with Slow Food USA as they promote the Makah Ozette fingerling potato, an exclusive variety to Irish Eyes Garden Seeds. Named after the Ozette village, one of five Makah Nation villages located around Neah Bay on the Olympic Peninsula of Washington State, this little known fingerling variety has been a staple in the diet of the Native American tribe for over 200 years. The lumpy little tuber with distinctive, deep set eyes has quite a past.

Though all potatoes originated in South America, they were first taken to Europe before coming to the United States. However, in 2004 Washington State University provided a phylogenic analysis showing that the Makah Ozette may have been imported directly from South America. In the spring of 1791 the Spanish established a fort at Neah Bay, bringing potatoes directly from South America. Severe weather conditions forced them to abandon the fort by the spring of 1792. The Makah people came across the carbohydrate laden food source and have now been cultivating it for over two centuries. Until the late 1980’s, the Makah Ozette fingerling was only grown by the Makah Nation.

To learn more about the Slow Food movement, the Makah Ozette potato or for information on how you can get involved, visit their website at www.slowfoodusa.org. 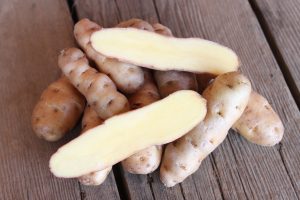